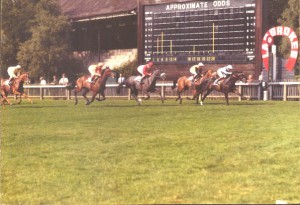 Fastacre winning at Newmarket, His wins included the Craven Stakes and Potters Trophy. Fastacre was trained by the great Scobie Breasley.

Amarone 1980 bay colt by Realm out of Misacre 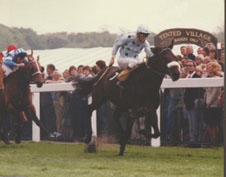 Amarone winning at Chester with John Reid aboard. Amarone was bred by us out of our mare Misacre. He was a second foal, with his older half sister, Swiftacre going on to produce Cheerleader, the Swedish 1000 Guineas winner. Amarone won his first start by 7 lengths and although he did not perform as a 3 year old, only winning once, he came into his own as a 4 year old, finishing second to Petong in the Wokingham and winning a further 5 times during his 4 year old season. He was sold to race in America where he won 10 times.

Fortune’s Guest chestnut colt by Be My Guest

Fortune’s Guest winning the Queen’s Prize at Kempton ridden by Simon Whitworth, beating Another Sam and Forward. Fortune’s Guest was purchased by us and went on to win 5 times and was placed on numerous occasions including when 3rd in the Northumberland Plate, Group 3. His career was cut short due to an injury and he was sold to stand at stud in India. 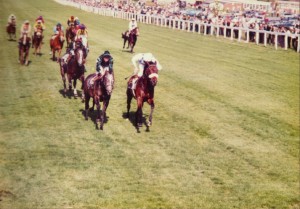 Caliph winning at Sandown with Lester Piggot on board. Although Caliph never won again, he finished a very credible 5th in the Stewards Cup beaten 4 short heads. That year the Steward Cup was won by Petong. 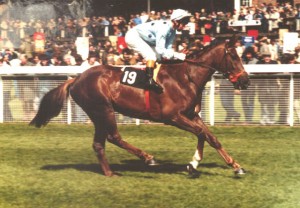 Heathen Prince on his way down to the start at Folkestone on his way to completing a memorable double, with Amarone having won the first race on the card by 7 lengths. Heathen Prince was placed once more before injury ended his career.

Other horses bred and raced:

Misacre was purchased by Scobie Breasley at the same time as Fastacre. Although she only ran once, finishing 4th in a Newmarket maiden, she was to us a great broodmare having produced multiple winners.

Today the Misacre line exists and we are fortunate to own the last two of the line !